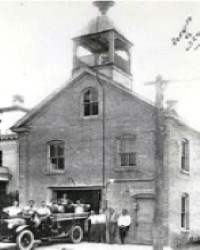 A Native American village, known by the English settlers as “Attawattacoquin,” was located in the area where Bridgeville would be established.

After being granted land by the English Crown, Christopher Nutter and family were the first European settlers to the area. They built a cabin on property now occupied by the Sudler House, the town’s oldest home built around 1730.

Francis Asbury, first American Bishop of the Methodist Episcopal Church, visited in the area and was instrumental in starting a Methodist Society as early as 1777. The Society members met in homes until during this year the first of several ME church buildings were constructed. The congregation currently is located at N. Laws and Market Streets and now called, Union United Methodist Church.

Bridgeville resident and businessman, William Cannon, who would become Delaware’s governor during the Civil War, laid out plans and sold lots, which primarily defined Bridgeville’s current “downtown.” The streets of William, Laws, and Cannon were named after William’s son, William Laws Cannon, who died during the Civil War while serving in the Union Army as an officer with the 1st Delaware Calvary.

The railroad came through on the western side of town. William Cannon had a temporary station built to accommodate passengers, along with farm produce shipments.

The First Presbyterian Church of Bridgeville was dedicated near the NE corner of Market and N. Laws Streets. Closing in 1917 the building was sold to the Tuesday Night Club.

Bridgeville was incorporated as an official town.

The Bridgeville Cemetery Company was formed after land was purchased at the northern end of Laws Street.

Henry P. and Phillip L. Cannon, sons of Gov. William Cannon, opened a cannery on the west side of the railroad. With Phillip soon leaving, and Henry’s son joining the business, H. P. Cannon and Son would be a primary business in Bridgeville for the next hundred years.

A four-room school for eleven grades was built at Delaware Avenue and S. Laws Street.

After the membership had met in local homes for a number of years, St. Mary’s Protestant Episcopal Church on William Street was built and dedicated.

Hardesty & Sons Funeral Home was established. In 2001 it was sold to the Parsell Funeral Home and Crematorium located on S. Laws Street.

The Bridgeville Tuesday Night Club, a literary society, was organized and became the motivating group in establishing a future library.

H. C. Layton opened a hardware store, and this business still operates on the west end of Market Street.

The U. S. Census identified Bridgeville’s population as 613.

The Baltimore Trust Company opened a branch bank at 302 Market Street. Today, PNC Bank, the most recent incorporation of the bank, is located across the street at the corner of Market and S. Laws Streets. The original building eventually became the town police station until 2020.

First time town commissioners are elected to govern the town. Many years later, a town manager would be hired to oversee the day-to-day operations.

Waterworks and sewerage were installed.

In December 1909 the first organizational meeting took place for a Bridgeville Volunteer Fire Company, which was incorporated in November 1910, and moved into its newly built firehouse on William Street in 1911. That building is now the Bridgeville Historical Society’s Museum and archive center.

With a very successful growing season Bridgeville was identified as the June Strawberry Capital of the Nation.

A new post office was built on the SE corner of Market and Cannon Streets.

O. A. Newton Company began and became a pioneer in the production of broiler chickens. The company has expanded into a large agriculture service company.

After being in the retail business for a number of years, T. S. Smith & Sons established a fruit growing and packing facility. Fruit grown from surrounding acres is still sold in company stores on Redden Road.

Having purchased the old Presbyterian Church at the corner of Market and N. Laws Streets a few years previously, the Tuesday Night Club opened the Bridgeville Public Library.

Sussex Highway, then routed on Main Street and currently Alternate Route 13, was cemented and expanded between Dover and Delmar, DE.

RAPA Company began manufacturing and selling scrapple and sausage at their facility at the corner of Market Street and Railroad Avenue.

In April the Bridgeville Volunteer Fire Company moved into a new station house on Market Street. Over the ensuing years the firehouse was expanded and adjoining property was purchased to build an additional building behind the Market Street facility.

A nine-hole golf course and tennis club opened just east of Railroad Avenue near Walnut Street. The facility existed until 1939.

East of town Route 13 is rerouted and enlarged as a dual highway. Gradually, the primary business district shifted toward that corridor.

The Bridgeville U. S. Post Office moved from Market St. to a new building on the corner of Walnut and S. Laws Streets.

Schools were desegregated and students of all backgrounds began attending local schools together. The school on Church Street that had served African American students was redesignated as North Bridgeville Elementary.

The Bridgeville Town Hall was constructed at the intersection of Main Street and Market Street.

The Greenwood and Bridgeville school systems merged to create the Woodbridge School District. The first class of Woodbridge High School on S. Laws Street graduated in 1970.

“Christmas in Bridgeville,” a fundraiser for the newly established Bridgeville Historical Society, was begun, and still attracts a hundred or so craft vendors and many visitors to Bridgeville on the first Saturday in December.

In order to relieve truck traffic on downtown streets, Route 404 coming from Maryland was redirected to the north of town.

Apple-Scrapple, a large festival recognizing the local agricultural industry, was begun and continues to usually attract over 30,000 attendees each first full weekend in October.

Bridgeville’s Historic District was established and placed on the National Register of Historic Places.

The Federal Census indicated Bridgeville’s population to be 1,436.

North Bridgeville Elementary, along with a second building constructed on the site, was renamed, Phillis Wheatley Middle School, in tribute to the young, black poet. This campus was later renamed Phillis Wheatley Elementary School, after the middle school students were relocated in 2014.

Within an expanded town limits to the south of town, Heritage Shores, a planned 1500-plus home community, primarily for individuals 55+, built and sold its first homes. By 2007 an eighteen-hole, public golf course had opened within the community.

After years on Market Street, a new Bridgeville Public Library was dedicated on S. Cannon Street.

The Bridgeville Volunteer Fire Company created a street view museum on Delaware Avenue that highlighted the history of the fire company. In 2012 a larger-than-life fireman statue was installed outside the museum that paid tribute to those who had faithfully served in the BVFD.